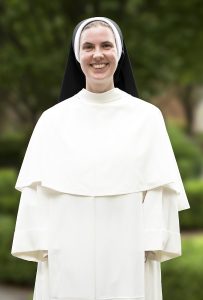 I began to explore the idea of a vocation even before I became Catholic. For some reason I bought an old novel about a nursing sister and began reading it my junior year of

college at St. John’s University in Annapolis. This is the first time I heard a sister being called a “bride of Christ”. The idea consumed my thoughts. It was so beautiful. In the book, the main character endured many hardships for the love of God and the desire to become holy. That anyone would willingly endure these hardships for Him showed me the importance and happiness that comes from holiness. I tried to find more books about sisters and began to read the lives of the saints.

At this time I also began to visit a Perpetual Adoration chapel at the church a few blocks from my apartment. I remember going in and seeing the Host in the monstrance for the first time. I genuflected because that was what everyone else was doing, but I had no idea why. I sat down and looked at the Host. It was so white, I thought that maybe it was a relic of the habit of a saint, but then I realized that I was looking at the Host, and thought, “Catholics think that is Jesus.” Then I realized, “It is Jesus!” I suppose that was the real moment of my conversion.

That tiny basement chapel is also where my desire to be a bride of Christ became real and tangible. On the left wall hung a large crucifix. One day during Holy Week a woman was standing by the crucifix, crying and kissing Our Lord’s wounds. A real Mary Magdalene before my eyes! I was filled with the desire to be poured out for the love of Christ, to sorrow in his sufferings and take pleasure in his joys. Shortly after this I read an essay by Edith Stein in which she said that once a person hears the call of God to be his bride, nothing else can satisfy her.

I entered the Church the following Easter. During that year, I explored religious life very seriously. My RCIA sponsor was a Carmelite nun. I went to daily Mass at the Carmelite Monastery near my school. After graduation, my desire for holiness did not wane, but I put thoughts of a vocation aside for the time being.

I moved to Alexandria, Virginia and began teaching second grade. I had a very fine spiritual director who encouraged me to strengthen my prayer life. He was a Dominican Tertiary. One day I bought a book about St. Martin de Porres, by Giuliana Cavelllini, an expert on St. Catherine of Siena. I liked the book and all the references I read to St. Catherine. This led me to De Wohl’s Lay Seige to Heaven, and St. Catherine’s Dialogue. It was true love! She was gentle and charitable but at the same time zealous and when necessary, bold.

I began to pray even more, making a holy hour each day. I felt that God wanted me to be in St. Catherine’s order. It is funny now to remember coming home from the January vocation retreat for the Diocese of Arlington and telling Father, “I want to be a Dominican but I am not sure where!” I had a hundred concerns about looking in the direction of Nashville. I was quieter than most of the sisters I had met and I wasn’t sure that I wanted to teach! But the more I prayed the more I felt that God was calling me South. I made a retreat at the Motherhouse and saw my attraction for the life expanding. I then returned a month later, this time convinced that this was where I belonged. I was accepted on Palm Sunday and spent the spring and summer in happy anticipation.

Now that I am here, I realize that not only is the life different from what I expected, but it is has actually exceeded by expectations. When I was looking at different communities, I paid attention to their daily schedule, prayer life, and apostolate. While these are all important factors, I have come to realize how important community life is. It is from the example of the other sisters that I learn to be more and more like Our Lady. With my sisters I am learning to see and serve Christ. The reason I am so happy is not because I live in such pleasant surroundings or have access to a pretty chapel with beautiful music, or even that I am taken up by the joy of the sisters. It is because I am learning every day to love more and to see the world from the perspective of heaven. Growing in virtue and coming closer to Our Lord is my true joy.